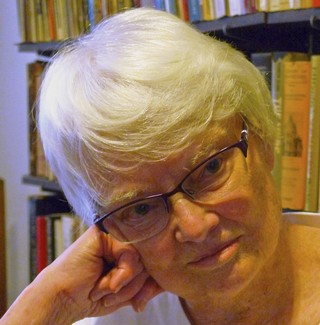 I grew up in a small town in Vermont, graduated from Middlebury College, and went to Columbia University in New York City, where I received a Ph.D.—specializing in medieval architecture and sculpture—from the Department of Art History and Archaeology. I taught art history at several universities, but I left academia to study horticulture and became the assistant horticulturist at The Cloisters, a museum of medieval art that is a branch of the Metropolitan Museum of Art. That job was ideal for me, since it involved medieval art, gardening in a setting that recreated medieval gardens, and a great deal of research into the plants and gardens of the Middle Ages. During my time at The Cloisters, I published Sweet Herbs and Sundry Flowers: Medieval Gardens and the Gardens of The Cloisters, and I gave lectures on medieval plants and gardens at various venues throughout the country.

After I left The Cloisters to become a full-time writer, I published A Medieval Home Companion, a partial translation of a 14th-century housekeeping manual that I had often consulted while working at the museum because it contained much information on medieval plants and gardens. I also co-authored two books on roses with the rosarian at the Brooklyn Botanic Garden.

I have always loved detective stories and mysteries, and when a literary friend said to me, "Just because you enjoy reading mystery novels doesn't mean you can write one," I decided to try. The result was In the Presence of Evil, the first of the Christine de Pizan mysteries.

In planning In the Presence of Evil, I was determined to make my sleuth a bold medieval woman. As I pondered whom to choose, I remembered an art installation by Judy Chicago that I had seen some years earlier at the Brooklyn Museum. Entitled "The Dinner Party," the exhibit celebrated 39 of history's most accomplished and mettlesome women, and among them was Christine de Pizan, who overcame the tragic loss of her husband to become a successful writer at a time when such a feat was deemed impossible for those of her sex. Christine recoiled from nothing. Early in her career, she became incensed at the way women were portrayed in The Romance of the Rose, which was very popular in the late 14th century, and she carried on a literary quarrel about the misogynistic tone of the book with some of the noted intellectuals of her day, undaunted by criticism from men who couldn't believe a woman would have the audacity to argue with them. Throughout her life she prevailed against seemingly insurmountable obstacles, and she always defended woman in her writings. Christine de Pizan was fearless: my ideal sleuth.

"A virtuous woman is rarer than a phoenix or a white crow."

"Do not think me, a mere woman, foolish, arrogant, or presumptuous for daring to criticize an author of such refinement whose work is much praised when he, just one man, dares to defame and censure without exception an entire sex."